Share All sharing options for: The Daily Roundup for 3/16 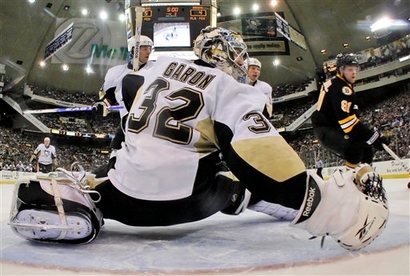 Mike Harrington has a terrible statistic about the Sabres this season.

The Lindy debate rolls on.  Harrington throws in his two cents about Lindy and the Roost does the same.

The Roost has a better take on the game on Saturday.

Pensburgh has the winning recap of the Penguins/Bruins game while Stanley Cup of Chowder has the losing recap.

The Rangers could have actually had Bill Guerin over the Penguins.

Ranger Pundit has the winning recap and the AP has the losing recap from the Rangers/Flyers game.

Canes Now tries to figure what it would take to make the playoffs.

The Panthers are wary of losing to teams that have nothing to lose.  This should sound familiar.

The Panthers are also seeming to struggle in the shootout as well.

The rumors floating around that ESPN is coming back to hockey just aren't true yet.

The Lightning would pass on Tavares if give the first pick.

It looks like GM's are planning on the cap going down for next year.

There is a fight brewing over the league and the union over the proposed fighting changes.

Nothing of influence tonight.

The story behind it is here.