Is It Time for a Change?

Share All sharing options for: Is It Time for a Change? 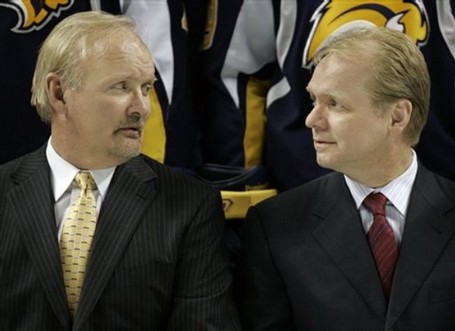 As I noted in the Daily Roundup, Bucky Gleason from the Buffalo News has a small piece the status of Darcy Regier and Lindy Ruff and whether the organization is looking for a change.  I know that this debate has come up a handful of times but the answer should be pretty clear.  No

Lindy Ruff has been a good coach in his tenure with the Sabres.  He is an institution in the city of Buffalo.  Ruff started with the Sabres in the 1997-98 season and has led his teams to the playoffs six out of ten seasons and to the conference finals or better four of those six times. Ruff is a good coach that gets his teams to perform to their expectations and for most teams, outperform those expectations.

Darcy Regier started with the Sabres during the same summer as Lindy.  He has created those six playoff teams and four conference final teams.  He has gotten a sense of luck in his career by having a team that catered to the new system of play after the lockout.  He has also created a handful of terrible teams including the three year stretch before the lockout.

Between the two, the Sabres have been competitive for the majority of their duration here.  There is a reason that they have been together for so long and the reason for that is they are good at what they do.  While being held by certain constraints from management, they have been able to create and coach teams that probably weren't supposed to do much and make them contenders.