Share All sharing options for: The Daily Roundup for 3/15 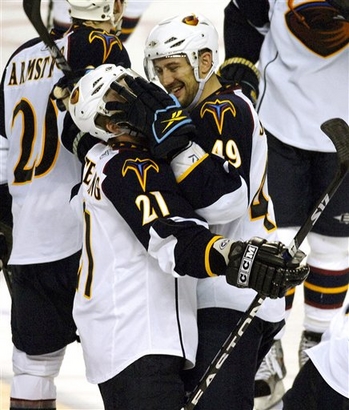 Kate over at the Willful Caboose has a running diary of her thoughts on the game.

Bucky Gleason talks to Larry Quinn about the status of Darcy Regier and Lindy Ruff.

Chris Butler is happy with his role with the Sabres.

The Atlanta Journal Consititution has the Thrashers take on the game.

Habs Eyes on the Prize has a look at the connection between Martin Brodeur and Canadiens fans on what was his record-tying 551 win.

In terms of the game Dennis Kane has the losing recap while In Lou We Trust has the winning recap,

Fanhouse has the winning recap for the Penguins/Senators game while Pensburgh has the losing one.

The Phiily Inquirer has the Flyers recap while the NY Daily News has the Rangers recap of the Flyers/Rangers game.

Litter Box Cats has the Panthers recap while the Tampa Bay Tribune has the Lightning recap of the Panthers/Lightning game.

Games that affect the standings are the Flyers at New York on NBC at 12:30pm, and Boston at Pittsburgh at 3:00pm,