Share All sharing options for: The Daily Roundup for 3/14 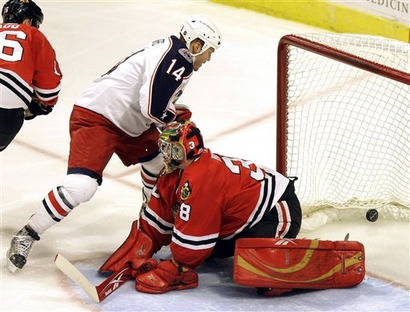 Two articles from the Buffalo News on what is a very slow day.

Habs Eyes on the Prize has a look at the debate surrounding who is better, Patrick Roy or Martin Brodeur

Habs Inside/Out has a look at something the Canadiens are doing tonight for the first time since 1995.

Pensburgh has a look at whether Malkin has wrapped up the scoring title.

HockeyBuzz's Brian Metzger has a look at the possible return of Miroslav Satan to the Penguins.

Blueshirt Bulletin has a look at this weekends home and home with the Flyers.

Zherdev has played his way into Tortorella's doghouse.

The Hurricanes are looking to mix things up for tonight's game against the Capitals.

Colin Campbell is shocked at George Laraques' comments about the new rule changes in fighting.

Michael Russo is talking the Wild and whether Marion Gaborik would sign a short deal with them.

Allen Muir of Sports Illustrated looks at the Eastern Conference bubble teams and if they will clinch a playoff spot.  His verdict of Buffalo, not good.

The Flames are closing their AHL relationship with Quad City and want to put a team in British Columbia.

No games were played with Eastern Conference teams last night so there is no change in the standings.

Games to Watch for Tonight

There are a handful of games to watch today:  Rangers at Flyers at 1:00pm, Senators at Penguins at 3:00pm, Devils at Canadiens at 7:00pm, Lightning at Panthers at 7:00pm, Hurricanes at Capitals at 7:00pm, Minnesota at Dallas at 8:00pm,