When Does Tellqvist Get His First Start

Share All sharing options for: When Does Tellqvist Get His First Start 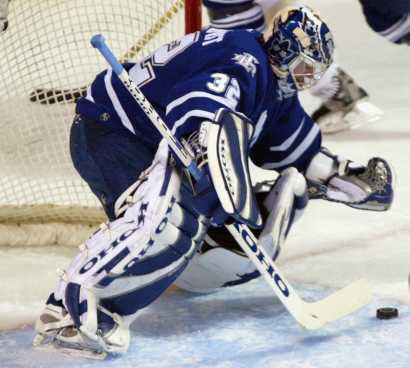 For a goaltender that was acquired for a fourth round pick, the Sabres are still trying to get as much out of Lalime as they could.  Patrick Lalime has played really, really well in the cleanup role for Ryan Miller.  The Sabres should give Lalime a rest every now and again if we have to require on his services for any length of time.

Mikael Tellqvist is 7-5-1 with 2.86 GAA and .907 SV% this season.  He played fairly well for the Coyotes this season but got stuck behind Ilya Bryzgalov and wasn't seeing much playing time.  He is a capable goaltender that could fill in quite nicely.  The main question is going to be when.

Most Sabres fans thought that he would see action in one of the two games this past weekend, either against Phoenix on Friday or Ottawa on Saturday.  But Lalime has been on such a roll that it has been hard to pull him.  The next few games for the Sabres are going to be clutch.

The Sabres face the Panthers at home on Thursday.  This game will be too crucial for Ruff to have enough confidence to play Tellqvist in net.  Besides, in his career, Tellqvist has gone 0-1 with 3.88 GAA and .865 SV% against the Panthers.  On Saturday, the Sabres host the Thrashers which would probably be a safer choice for Ruff to play Tellqvist.  It would give Lalime about a week to rest between games and Tellqvist in his career is 2-0 with a 1.44 GAA and .940 SV% against the Thrashers.

Lindy Ruff has always had a propensity to ride a starting goaltender for as long as he could due to the fact that he never has trusted a backup goaltender.  This was never more apparent last year where Miller played the final 34 games in a row.  Tellqvist was brought in as a better backup than untested Jhonas Enroth and should get the chance to see what he can actually do.