Share All sharing options for: The Daily Roundup for 3/10 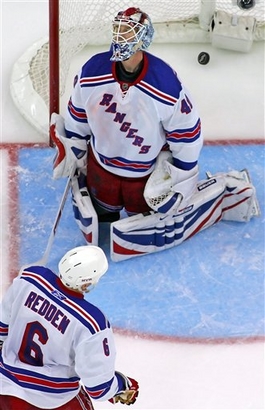 A fairly slow day in Sabres news brings along only this article from the Buffalo News about Dominic Moore and his brother Steve Moore.

The Canadiens have fired Guy Carbonneau.  GM Bob Gainey will take over as interim coach for the rest of the season.  Here are reactions from Habs Eyes on the Prize, Fanhouse, Dennis Kane, and Montreal Gazette.

Canes Country has a recap of the Hurricanes/Rangers game from last night. Here is the recap from the News and Observer. On the Rangers Beat has the reaction from the losing side.

If you remember a few weeks ago we posted a Youtube of Florida Panthers' radio guy Randy Moller's goal calls.  Here is a good piece from the Miami Herald about the cult sensation.

A few quick notes from the Herald on Panthers injuries heading into their game tonight against the Penguins.

The Confluence has noticed that while the Penguins keep on winning, so does everyone else.

The NHLPA is looking to institute a rule against hits to the head.

The Stars have signed center Brian Sutherby to a two-year $1.6 million contract.

The games in play tonight are Edmonton at Montreal at 7:30 and Florida at Pittsburgh at 7:30.  I would assume that most of us are Bills fans besides being Sabres fans here so here is the moment of the day.