Starting today, I am starting a new daily feature called The All-Time Number Debate.  So many Sabres have come and gone in the organization over the past 39 years.  But who was the best wearing their number.  This is going to settle that debate.  Using the Buffalo Sabres Alumni listing of all-time uniform numbers we will post a player a day based on their number.  After a certain uniform number is up, we put the vote to you.

There are a few things to consider, though.  Certain players wore more than one number in their Sabres career.  Consider today's player Martin Biron.  Biron wore 43 for most of his time here in Buffalo.  But when he first came up, he wore the 00 jersey.  So, looking at the jersey numbers you have to consider only the time the player wore the jersey and not their overall career.  Also, retired numbers are not up for debate.  While other players have worn that particular number and will be featured, the best player wearing that number has already been decided 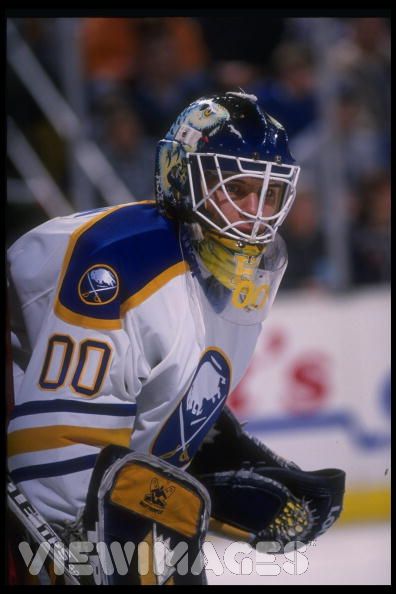 Today's player is Martin Biron wearing the 00 jersey.  This didn't happen for very long, three games in the 1995-1996 season.  Biron was playing for the Beaufort Harfangs of the QMJHL when he was called up to play three games between late December 1995 to early January 1996.  He got shelled in those games.  His first game on 12/26/1995 was against the Pittsburgh Penguins.  He allowed 4 goals on 24 shots and was pulled for Steve Shields in the second period only to be put back in the third.  His second game was 12/27/95 against the Ottawa Senators in which he allowed 4 goals on 34 shots.  His final game was 1/6/96 against the Montreal Canadiens where he only played 19:26 replacing John Blue.  He allowed 2 goals on 6 shots.

Biron will be the only Sabres player to wear the 00 jersey.  The NHL database could not register the number 00 as a proper number so it is a banned jersey number in the NHL.