Share All sharing options for: Dissecting the Special Teams Scoring

D.O. took a look a couple of days ago at how the Sabres scoring is lopsided with Roy and Vanek scoring about 33% of the teams goals this season.  Another question to look at is how does the team break down in scoring on the power play and shorthanded.  Starting by looking at players, Vanek is crushing the team on special teams scoring.  The Sabres as a team have scored 50 special teams goals (45 on the powerplay and 5 shorthanded).  Vanek has scored 15 of those goals this season or 30% of the total.  Looking at the chart below shows the breakdown by player: 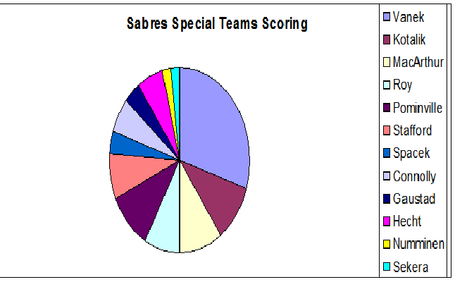 As you can see from the chart, three players are contributing to half of the teams special teams goals.  When the goals are broken down by position, mainly offense and defense, something is apparent.  The defense does not score enough.

For a team is going to make the playoffs, the defense needs to contribute to the score sheet on the special teams.  With the cannons that we have on defense, mustering only 4 goals is not acceptable.  This team needs to find a good defensive powerplay quarterback either at the deadline or during the offseason.  It will make the team that much better.