Share All sharing options for: Giving Thanks: Buffalo Sabres Edition 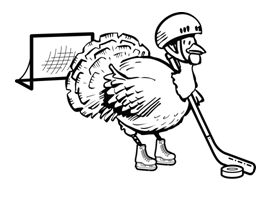 With the holidays upon us, I thought it might be nice to stop and give thanks for those things in our hockey lives we hold dear. Even though the Sabres have been struggling, there's still a lot to love about this team, and about our lives in general. Feel free to share yours in the comments!

Thank you for the fourth line of Matt Ellis, Paul Gaustad, and Patrick Kaleta:
D.O. has called them the best fourth line in hockey and I would agree with that. The players on this line have combined for 9 goals, 8 assists, and are a combined +16. To be frank, I've been more excited to see this line than our top two lines the past two weeks, and it's because these guys are always making something happen. Whether it's the big hit, drawing a penalty, forechecking, or just a nice hustle play these guys are giving other teams headaches on every shift. I wouldn't mind seeing them get as much ice time as our top two lines until those players start performing again. So thanks, fourth line, for giving me a reason to be excited about what is for many teams nothing more than a checking line.

Thank you for Lindy Ruff and Darcy Regier:
Before the season, many people were calling for Lindy, Darcy, or both to be fired in order to shake up a team that has been together for over a decade but has not yet produced a Cup and has missed the playoffs for the last two seasons. However, the team is ready for a playoff run this year, and it looks like the Sabres are primed for a serious Stanley Cup run over the next 2-3 years with Ryan Miller entering his prime, the continued development of its young core, a few more smart FA signings, and the emergence of rookies Tyler Myers and Tim Kennedy, as well as others such as Nathan Gerbe and Tyler Ennis waiting in the wings. It seems as though Regier's vision for this franchise is finally coming to fruition, and things only look better as you look to the next few years. With Lindy Ruff again in the running for the Jack Adams trophy according to every quarter-year prediction out there, this team has a very bright future. So thanks, Lindy and Darcy, for giving us hope for the future.

Thank you for Tyler Myers and Ryan Miller:
We have a very young player on our team who is playing excellent hockey right now, but we still have no idea how high his ceiling is. Think about that for a second. There's always the chance that he doesn't grow as an athlete and player, but when you hear things like "He's the best skating big man I've ever seen" (from Scotty Bowman) it makes you think how dangerous Chara's body could be with Myer's skating ability and propensity to jump into the rush. After trading away Brian Campbell, Myers finally gives Sabres fans a D-Man to really be excited about. Ryan Miller, on the other hand, is the only truly elite player we have and is the difference between us being a playoff team and 11th place. He's someone we can hang our hat on, and the only player on our team who scares the opponent. So thanks you guys for giving us two players to be really excited about in a season where most of team seems to be mired in sub-par years.

Most of all, thank you for family:
Hockey is the team-iest of team sports, and to me every hockey team functions like a family. Not only that, but the legions of Buffalo fans all over the country and the world are part of that extended family. When the team hurts, we all hurt with them, and when they win, it's like we somehow spurred them on from our couches and sports bars. I know I'm not the only person who's done rally shots, or sat in an awkward position on the couch for half a period because I thought it was bringing us good luck. Every time I see someone with a Sabres hat in another city I have no hesitation striking up a conversation, and always end up having a good time talking hockey. On this day when we give thanks for everything we hold dear, I hope that you, me, the Buffalo Sabres team, and all hockey fans around the world can spend time with family and give thanks for those things that really matter. After all, at the end of the day hockey is simply a game, and win or lose, it's best enjoyed with those we love. Happy Thanksgiving!