Q and A With Former Sabre Dixon Ward

Share All sharing options for: Q and A With Former Sabre Dixon Ward

Dixon Ward wasn't a major scorer in the National Hockey League but he was someone who you'd want on your team if given the choice. Ward spent five of his ten seasons with the Buffalo Sabres providing defensive zone coverage, secondary scoring, a willingness to get his hands dirty and an attitude that was ready for the playoffs.

A member of the Sabres squad that reached the Conference Finals in 1998 and the Stanley Cup Finals the next year, Ward was a prime example of a player who did many of the little things properly. With 13 goals and 32 assists, his best campaign in Buffalo came during 1997 and his 12 points in 21 postseason games two years later had a part in the Sabres' long run.

Now the Vice President of the Okanagan Hockey School, he continues to keep hockey a part of his life. Recently, Ward was kind enough to lend me some of his time and speak to me about his career on and off the ice. 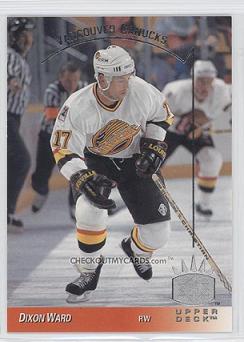 1) What would you accredit the most for having such a phenomenal rookie season with the Vancouver Canucks?

We had a highly offensive team and I was fortunate enough to get a chance to play in all of the different situations.

2) After 103 games with the Canucks, you spent some time with both Los Angeles and Toronto where your numbers dropped. What were the primary issues playing for those clubs?

In each of those clubs, my role changed. I was played in a different capacity with different expectations.

3) Were you happy with the role you had in Buffalo which was shadowing talented offensive players regularly? Is that the duty you saw yourself eventually performing in the league?

I was happy in any role. In Buffalo, I learned how to be a strong two-way player and really enjoyed the responsibility of playing against the other team's best players.

4) As a defensive forward, you obviously squared off against many stars from opposing teams. Who would you say was the most difficult to keep at bay?

Playing Pittsburgh was always difficult because if you weren't chasing Jaromir Jagr, you had to deal with Mario Lemieux. Both players were very big, strong and tremendously talented.

5) Looking back, do you think remaining in Vancouver would have been great or was the eventual move to Buffalo best for you?

You never know what would have happened so I don't think about it too much. I enjoyed my time in both places.

6) In an interview a couple of months ago, I spoke to your former teammate Jason Woolley about the controversial Stanley Cup defeat to Dallas in 1999. Had the goal been rightfully disallowed, could you have seen the team coming back to win the series?

We certainly could have but you never know if we would have. It was an unfortunate way for it to end.

7) With the playoff experience you had, could you tell me a little about the atmosphere and pressure for players to perform well?

Playoffs were always an incredible experience. It was a chance to rejuvenate yourself and your team. It wasn't so much pressure as excitement and sometimes anxiety. I loved playoff time and usually played my best hockey at that time.

8) Who would you say was the most underrated player you ever performed with?

I would have to say Stu Barnes. He never got a lot of attention but he was one of the smartest players I ever played with.

9) Is there a player you see in the game today who reminds you a little of yourself in terms of style?

I really relate to a guy like Tyler Kennedy in Pittsburgh. He is a great third-line player who can score as well.

10) You competed in Switzerland during the latter stages of your career. How did that experience treat you?

I loved the experience in Switzerland. It was a great place to play and enjoy the game in a different culture and end my career.

11) How did you first get involved with the Okanagan Hockey School?

Near the end of my playing career, I helped my friend and now partner, Alan Kerr with camps in Kelowna. After retiring, I was given the opportunity to become a partner and was excited to get involved.

12) Lastly, what was the proudest moment of your hockey career?

I think being inducted into the University of North Dakota Hall of Fame last week is my proudest moment.

I want to thank Dixon very much for taking the time to speak with me and wish him the best of luck in his future work with the Okanagan Hockey School.