The timing of this post couldn't be worse, with the Sabres scoring 10 goals on Tuesday night against the Edmonton Oilers.  Truth is that i have been working on this post since last week and just now had the time to get it up on the site.  Even after the Sabres 10 goal outburst on Tuesday night the numbers still hold true.

The problem isn't the Sabres overall goal total, because they are on pace to score as many goals as they did last season.  The problem is the secondary scoring on the team.  Prior to Stafford and Connolly scoring at will this week, this team relied upon only Derek Roy and Thomas Vanek to score goals.  Vanek and Roy were the teams two best players last season as well but not to the extent they are relied upon this season.

It's easy to rely on your best players and even the good teams do but not to the extent the Sabres do.  The Detroit Red Wings lead the NHL in scoring this season and their top six goal scorers are within six goals of each other.  The gap between the Sabres top six goal scorers is 19 goals.  That number may look worse than it is because Vanek is near the top goal scorers in the NHL with 29 but you get the point.

Let's take a look at just how much the Sabres have relied on Vanek and Roy this season in comparison to last season.

Here is a look at the goal production from Vanek and Roy last season.  It clearly shows that the team relied heavily on their two best players but they got scoring from other areas as well. 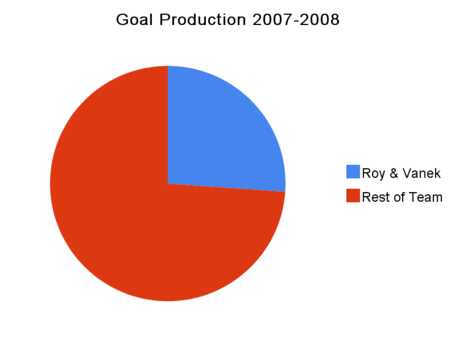 Here is a look at the goal production this season.  It clearly shows that the team has relied even more on Roy and Vanek.  Both players are on pace for better seasons than they had last year but some other players are struggling mightily. 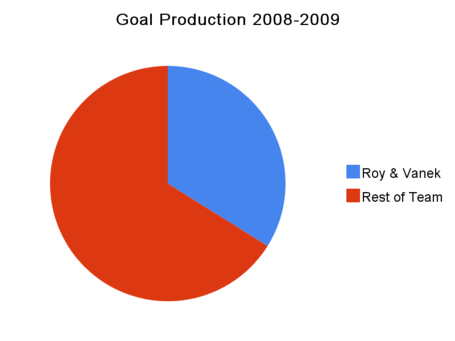 As you can see in the chart above...the blue area is much bigger this season than last.  Most of the season Roy and Vanek played on the same line but with the return of Tim Connolly that has changed.  If Connolly can stay healthy, it will help this team greatly.  It will allow Vanek to play with Stafford and Connolly while Roy plays with Pominville.  Up till this point it has been Hecht on the other wing but one has to wonder how long that will continue.

The above chart shows the importance of Tim Connolly.  If Connolly goes out with injury again this team will start to wonder where the goals are coming from.  It's always tough to say that one player makes a team but the health of Tim Connolly may be the difference between a playoff team and a non-playoff team.  If not Connolly, who else can step up and help out Roy and Vanek?