Share All sharing options for: Sabres Earning Their Money

It's inevitable with each and every team that some guys will earn the money they make while others won't.  Not too long ago I had a reader ask me to analyze players goal production based on salary and I finally had an opportunity to do it.  It was pretty much exactly what you would expect with a couple of notable exceptions.

For some reason there is an anti-Roy sector among Sabres fans but for the money he makes there is no reason he shouldn't be considered the Sabres best player.  Roy has scored 18 goals which is second only to Vanek and he has the most points on the team.  He is doing that while making much less than Thomas Vanek is.  As the chart below will show, Roy and Vanek have very similar numbers when it's broken down by salary.

The above chart will give you an idea of who is earning their money and who is being overpaid.  I put Jason Pominville on the list twice because he has a new contract that will kick in next season and I didn't think it was fair that he be judged off of the money he is making this season.  That being said, both Drew Stafford and Clarke MacArthur look pretty good on this chart but both will be due raises next season becuase they are restricted free agents.

If the chart above doesn't paint the entire picture, it looks even more overwhelming when it is put on a bar graph. 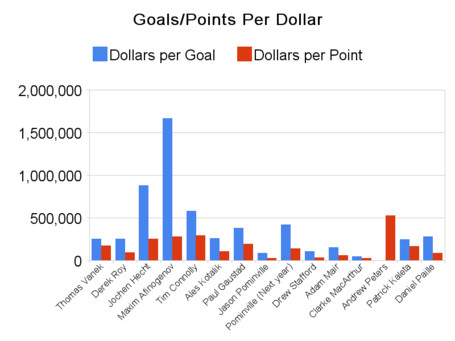 As you can see...Maxim Afinogenov and Jochen Hecht are by far the two most overpaid Forwards on the Sabres roster.  It's unfortunate to see the numbers for Afinogenov look so bad but as I've said before...he found his way into Lindy's doghouse and he has no hope of ever getting out.  I have another post on the way over the weekend that is talking about the Sabres tradeable players...who is likely to leave and who is likely to stay so stay tuned for that.

The above charts obviously don't tell the whole story because a lot factors go into these numbers.  I didn't do anything earth shattering here and much more analysis could possibly go into it but it does give you an idea of whether or not the Sabres are getting their monies worth out of players.  This doesn't take into account if a player is terrible defensively either.  It simply is a guage of points versus salary.

I would love to hear any comments that anyone has on the salary numbers that I posted above.