Share All sharing options for: Miller and Kotalik Work Overtime

It's funny how things work sometimes.  In 2006-2007 the Buffalo Sabres were one of the best teams in the league when it came to the shootout.  You could make an argument that the only reason they won the Presidents Trophy was because of their proficiency in the shootout.  The Sabres won 10-of-14 shootouts that season.  Only the Tampa Bay Lightning (10-of-12) had a better winning percentage in the shootout and no team won more than 10 games.

The biggest reason for the Sabres success was Ales Kotalik and Ryan Miller.  Everyone always pointed to Briere as the Sabres go-to guy in the shootout and he was pretty good.  In fact he scored six goals that season, ranking him with the League Leaders in shootout goals.  Although Briere scored the most he wasn't automatic, he scored six goals on 14 attempts while Ales Kotalik emerged as a shootout star, scoring five goals on only seven tries.

The one-two punch of Briere and Kotalik was a pretty good start for the Sabres but it was Ryan Miller that was the difference.  Miller won 10 out of 14 shootouts he took part in that season.  Only Martin Broduer played in more shootouts but they both had 10 wins on the season.  Miller stopped 37-of-46 shots which was in the top five for save percentage.

Those numbers reflect on the 2006-2007 team that thought they would win every game.  Last season the confidence level of the team was not good and it showed in the teams shootout failures.  In 2007-2008 the Sabres played in 13 shootouts, one less than the prior season.  The biggest difference...the only won four times.  In comparison to the prior season, that was six points they left on the table and would have been enough to make this a playoff team.

In case you wondering the exact statistics...Ales Kotalik scored five goals again but with 12 attempts this season and Ryan Miller stopped only 19-of-33 shots and had the third worst save percentages in the league.

It seems that last season was an aborition because this team is once again enjoying success.  They have already won six times this season in only eight attempts.  Ryan Miller and Ales Kotalik are once agains a really big part of it.  Ales Kotalik has scored five goals again this season in only eight attempts.  Ryan Miller has to be the biggest story.  He has allowed only five goals in 25 shots and has earned six victories in seven shootouts that he has took part in. 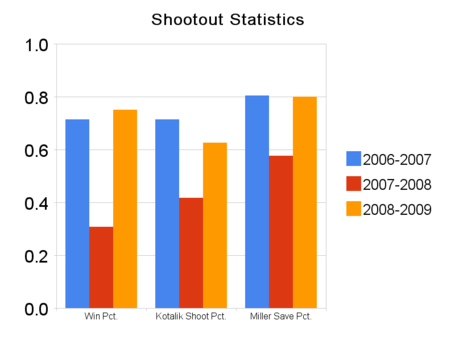 The chart above is an attempt to show you just how drastic a difference it is between this season and last.  When the season ends the extra points the Sabres earned in the shootout could be the difference between making the playoffs and missing the playoffs.  I'm not ready to predict that the Sabres are going to be a playoff team just because they have been good in the shootout but the extra points certainly help.