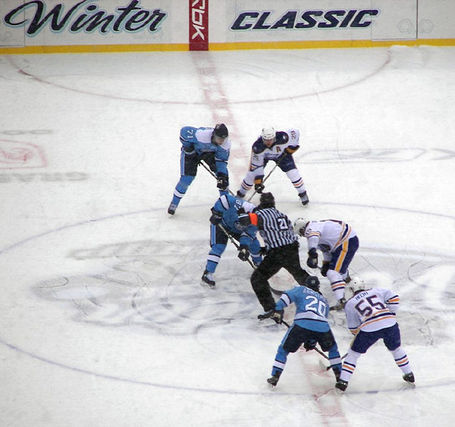 It's amazing that it has been one year since the Buffalo Sabres and Pittsburgh Penguins played in the Winter Classic at Ralph Wilson Stadium.  It's been a full year since the game took place and memories are a little bit fuzzy but I remember the excitement before, during and even after the game.  It was a shame that the Sabres couldn't pull out a victory but it doesn't take away the memories that will last a lifetime.

In a scene that was more fitting for a Buffalo Bills vs. Pittsburgh Steelers game, the Pittsburgh Penguins beat the Buffalo Sabres 2-1 in a shootout.  Sidney Crosby shot the puck through the five hole of Ryan Miller in the shootout for the victory.  The celebration ensued and it was evident that this game was more important than any other regular season NHL game.  The game was dubbed the Winter Classic and it was definitely a winter wonderland.  The conditions ranged from rain, snow, sleet and back to snow again but the game continued on.

Jason Pominville was able to reflect for a minute and take a look back at last year's Winter Classic game as well.

I remember walking out of the tunnel at Ralph Wilson Stadium, which was such a cool moment for us. Just looking around and seeing and hearing all of the people there, the fireworks, the bag-pipes playing - It was the perfect set up.

It's great when you see a professional athlete become human and share their true feelings.  Can you imagine to walk out the tunnel like he talks about...it would be the most surreal feeling.