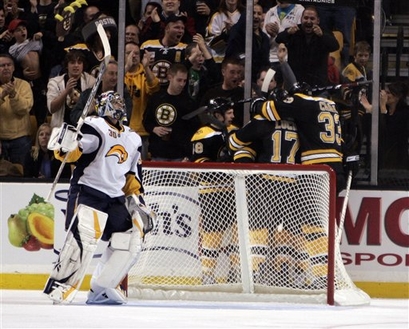 It becomes frustrating watching this team play, although that is expected when you are a Sabres fan.  Buffalo played a good first period but Manny Fernandez was good and allowed only one goal to Tim Connolly.  The Bruins responded with a goal of their own and the teams were tied 1-1 after one period.

The Bruins took over in the second.  It was complete domination from the second period until the final horn sounded.  Boston scored twice in the second period on goals that Ryan Miller probably should have stopped.  With that being said, Miller made plenty of outstanding saves and he was the only reason the final score wasn't six or seven to one.

They'll have a couple of days off before playing the St. Louis Blues at HSBC Arena on Wednesday.  I'll have much more on this game and other Sabres topics tomorrow. when I settle down a little.