Sabres give one away to Thrashers

Share All sharing options for: Sabres give one away to Thrashers 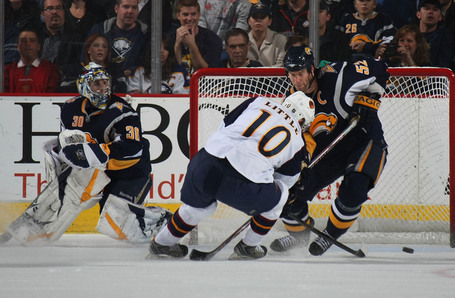 On a night when Max Afinogenov scored his first goal of the season and Thomas Vanek added to his league leading goal total, it was a couple of dumb penalties that were the story.  Craig Rivet took a marginal (but dumb) hooking penalty that led to the Thrashers tying goal and Derek Roy took an even worse tripping call in overtime for the game winning goal.

It was only the second time this season the Sabres have lost a game when leading after two periods but this one was especially pathetic.  The Thrashers battled for a 4-3 victory last night against the Islanders and didn't arrive in Buffalo until late Thursday night/ early Friday morning.  The Sabres should have been able to control play in the third period and the Thrashers were the better team in the final period.

It was an offensive game from the outset with both teams playing especially sloppy in their own zone.  The Thrashers first goal was scored as the result of a lazy backcheck by Tim Connolly and that seemed to be the start of a bad night defensively for the Sabres.

As bad as the Sabres were in the defensive zone was as good as they were in the offensive zone.  They scored two more power play goals and had plenty of opportunities 5-on-5.  Generally four goals is enough to win a game, especially for the Sabres who were allowing just over two goals a game.  Miller began the game leading the league with 1.62 goals against average and allowed five goals in tonights loss.  I'm not pinning this one on Miller he needs to get more help from his defense and forwards to help clear pucks.

Thomas Vanek had another strong performance, tipping a shot from Tim Connolly by Johan Hedberg to give Buffalo a 4-3 lead and just failing to break a 4-4 tie.  Vanek made an amazing move to stop behind the net and tried to slide the puck in by the goal post but replays were incoclusive as to whether or not the puck ever crossed the goal line.

The good news is that they are right back at it tomorrow night against the Boston Bruins.  Make sure to join us in the Game Day Thread...if you never been in a Game Day Thread on SB Nation/Die by the Blade it is unrivaled by any other place.  The comments refresh in real time without refreshing...stop by and check it out.

A total of five people made comments tonight with Joan O. leading the way with 48.  The other participants were myself, HO, Tony O. and qdloser.