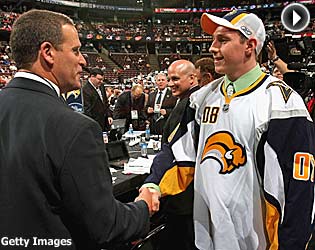 Luke grew up with hockey in his blood his father played professionally in the NHL, IHL and AHL.  Luke received his first pair of ice skates when he was only one and started playing organized hockey at the age of five.  As a kid Luke not only played hockey but he was a fan of the Detroit Red Wings and he idolized Steve Yzerman.  Most kids move away to play junior hockey but in his first two seasons in "The Q", he had an opportunity to stay home and play for the St. John's Fog Devils.  This season the St. John's team moved to Montreal and Luke was forced to move away from home for the first time.  He had some early struggles in "The Q" but he responded last season and is off to a good start this season as well.

Luke is a big strong kid and at the age of 18 he is expected to get even stronger.  He is not only big and strong but he uses his strenght to earn opportunities in front of the net.  He idolized Yzerman as kid but his game is more like a player like Cam Neely.  It's not fair to compare a young kid to a player like Cam Neely but it shows how much talent he could possibly have.

Adam seems to be very comfortable playing in "The Q" and is proving it by putting up huge scoring totals.  He is still very raw around the edges and not anywhere near playing in the NHL.  If he continues to improve this season, he will probably get an opportunity to make the AHL team next season although another season of junior hockey is likely.  If he plays the game that needs to play (strong in front of the net) he could be a key NHL player.  At this point it's too early to label him as a future superstar but he can be if he works at it.