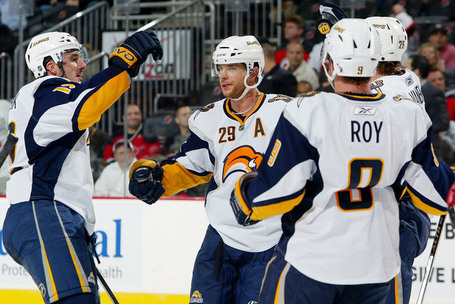 It was another great performance for Ryan Miller as he shutout the New Jersey Devils to earn his ninth career and second consecutive shutout.  Miller was not tested in the early going but he was the best player for either team in the second half of the game.  Miller made 24 saves in the game but 19 of those shots came in the final 30 minutes.

Buffalo dominated the firts period, outshooting New Jersey 20-3 but only beat Devils goalie Kevin Weekes once.  Jason Pominville finished a nifty passing play with a shot that beat Weekes over his shoulder with the Sabres on the power play.  Weekes was just a split second late sliding across the crease and Pominville found the back of the net.

Buffalo didn't let up in the second period and were outshooting New Jersey 25-5 after 30 minutes of play but a hooking penalty on "Big Hank" turned the momentum in favor of the Devils.  That is when Ryan Miller took control of the game and stopped everything the Devils threw at him.

As good as Miller was, it was the Sabres second goal that pretty much sealed the deal.  Winning face-offs has been a problem for the Sabres all season but Paul Gaustad won a key offensive zone face-off and Patrick Kaleta got his first goal of the season.  After Gaustad won the face-off Spacek slid the puck to Sekera who fired a shot from the point.  It initially looked like a shot but replays showed it was a perfect pass to Kaleta who made a nice tip by Kevin Weekes.

After playing their worst two games of the season the Sabres have bounced back nicely with a 5-0 win over the Caps on Saturday and a 2-0 win tonight.  Last season Ryan Miller did a lot of talking but did little to back it up, this season he has responded from playing his worst game last Thursday against the Lightning.

We had a total of six people comment in the opne thread paced by Joan O. with 35 comments.  People who made comments...