Share All sharing options for: Sabres, Lalime stung by Jackets 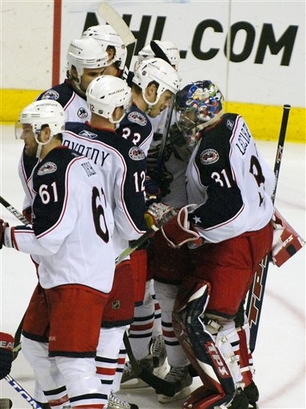 Last night I was broadcasting a hockey game and was unable to be at home in front of the TV watching the Sabres take on the Columbus Blue Jackets.  That may have been good news considering the outcome but I chose to find a link on the internet and put myself through the pain of seeing parts of that game.  The Jackets thumped the Sabres 6-1 in front of a sellout crowd at the HSBC Arena.  The Sabres were embarrassed on home ice against Columbus last season as well and we know how that turned out.  Hopefully this game isn't an indication of how fragile this team may be.

The Sabres received good news prior to the game when they found out that Tim Connolly would be in the lineup despite suffering a bruised chest against St. Louis on Wednesday night.  In fact he not only played but he led all Sabres skaters with 21:06 of ice time.  Maybe it was a ploy by Lindy Ruff to confuse the Jackets (note: It didn't work).

Word that Connolly was in the lineup was the last good news the Sabres had all evening.  Patrick Lalime did his best impersonation of Jocelyn Thibault and the Sabres were down 3-0 despite allowing only six shots.  In fact the Sabres were outshooting Columbus 27-10 after two periods but the Jackets held a 4-1 lead.

The Jackets first period goals were scored by familiar faces.  R.J. Umberger is best remembered in Buffalo for taking a huge hit from Brian Campbell in a first round playoff game in 2006, he scored the Jackets first goal and he added a goal in the third for a two goal night.  Ex-Sabres captain Mike Peca came back to haunt his old team, scoring the games second goal and he added six penalty minutes for the Jackets.  If I've never mentioned it before...I despise these two players.  Umberger went to Ohio St. to play college hockey and I was never a fan of the greed (or what I perceived to be greed) of Mike Peca.

In the second period Lindy Ruff decided to make a change and put Ryan Miller in place of Lalime but he elected to go back to Lalime in the third.  Lalime allowed two more to get by him and the final score was an embarrassing 6-1 loss to the Columbus Blue Jackets.  Pascal Leclaire was solid in net for the Jackets turning away 36-of-37 shots he faced.

Luckily the Sabres get right back at it with a game at the Mellon Arena (Igloo) in Pittsburgh tonight.  Buffalo will need to play a much more complete game toniight if they want to compete with the defending Eastern Conference Champions.