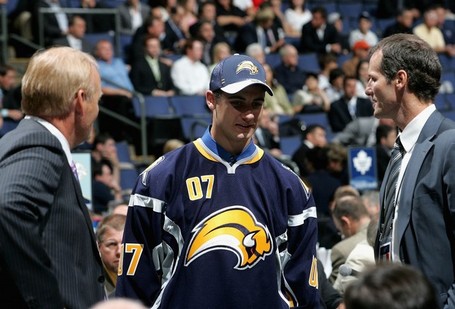 It was at the age of 10 that TJ Brennan realized his love for the sport of hockey.  He is described as a kid that never wanted to get off the ice and never wanted to let go of his stick.  Unfortunately New Jersey is not a hockey hot bed and at times it was difficult to always play hockey so TJ played lacrosse as well.  He was good enough at lacrosse that he was being courted by colleges to play lacrosse, including perennial power Hobart University.  TJ thought he would probably go to Hobart and play division 1 lacrosse and division 3 hockey until he was asked to participate in a two week tryout with the St. John's Fog Devils of the QMJHL.  Although he didn't play particularly well in the tryout the Fog Devils admired his toughness and potential and offered him a contract.  Brennan quickly accepted and after scoring 16 goals in his first season he won the Raymond-Legace Award for the QMJHL Rookie of the year.

Brennan is a big kid at six foot and 205 pounds and he is willing to use his body.  More importantly is his agility for a big kid and how quick he is on his skates.  He would be termed as an "offensive defenseman", the type of player that fits the mold of a current NHL defenseman.  Brennan has improved steadily in his own zone but this is still an area that he needs to improve.

It seems that the sky is the limit for Brennan if he works at it.  If we have learned anything about TJ it's that he works hard to be better everyday.  It's probably a couple of seasons away but Brennan will become an everyday player in the NHL and will be a household name.  If he improves defenseively there is no telling how good he can be.  He compares himself to ex-Sabres Brian Campbell but is it a stretch to think he could be better?