Connolly suffering from back injury

Share All sharing options for: Connolly suffering from back injury 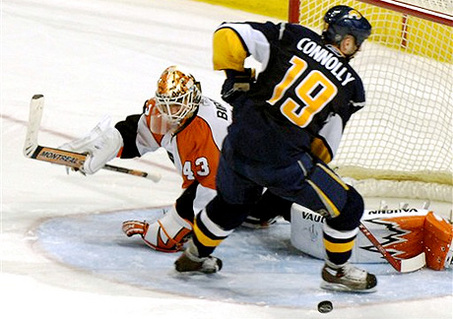 I sit down to watch the game on Friday, excited that hockey season is ready to begin, and I am greeted with the news that Tim Connolly won't be in the lineup.  I shouldn't have been surprised because we are all used to Timmy being out, but he assured us he would be in the lineup.  I believe that the quote was "100 %, no chance I miss that game" or something to that effect.

The loss of Connolly is big because he is possibly the most talented player on the team.  It's a shame to see so much talent wasted because of injury but at some point the Sabres need to move on and allow Timmy to play (or sit out) elsewhere.  I have always been a Tim Connolly apologist but not anymore, I feel betrayed this time.  Every year we hear the same rhetoric regarding his health and how he is in the best condition of his life and than we have our hearts ripped out when he can't play.

I know I'm being a bit harsh but it is for effect.  The reality is that for all of his talent he can't stay on the ice and it's time the Sabres start making plans for his replacement.  It may be a player like Marek Zagrapan or Nathan Gerbe from Portland or it may be someone from outside the organization but it needs to happen now.  The Sabres can no longer have Connolly be a factor in their plans.  This is the final year of his contract and the Sabres will probably just let everything play out but I don't expect him in the Blue & Gold next season.

Contrary to what the national media wants you to believe, the Sabres are not thin at Center with Derek Roy, Jochen Hecht, Paul Gaustad and Adam Mair.  The problem is that right now Gaustad is out for a couple of weeks, which forces Clarke MacArthur to play out of position.  I thought Mair played well on a line with Kotalik and Afinogenov but I would think MacArthur would add more of an offensive punch to that line.

The latest on Connolly's injury is that he is day-to-day and will probably be a question mark for at least a week.  There is no indication as to when the injury occurred and the teams medical staff is working hard to try to figure it out.  With all the injuries Timmy has had it's not out of the realm of possibility that he went to bed healthy and woke up with a hairline fracture of a vertabrae.  I know that's not likely but that is a day in the life of Tim Connolly.